The Israeli intererests section at the Netherlands Embassy in Warsaw, 1967-1986 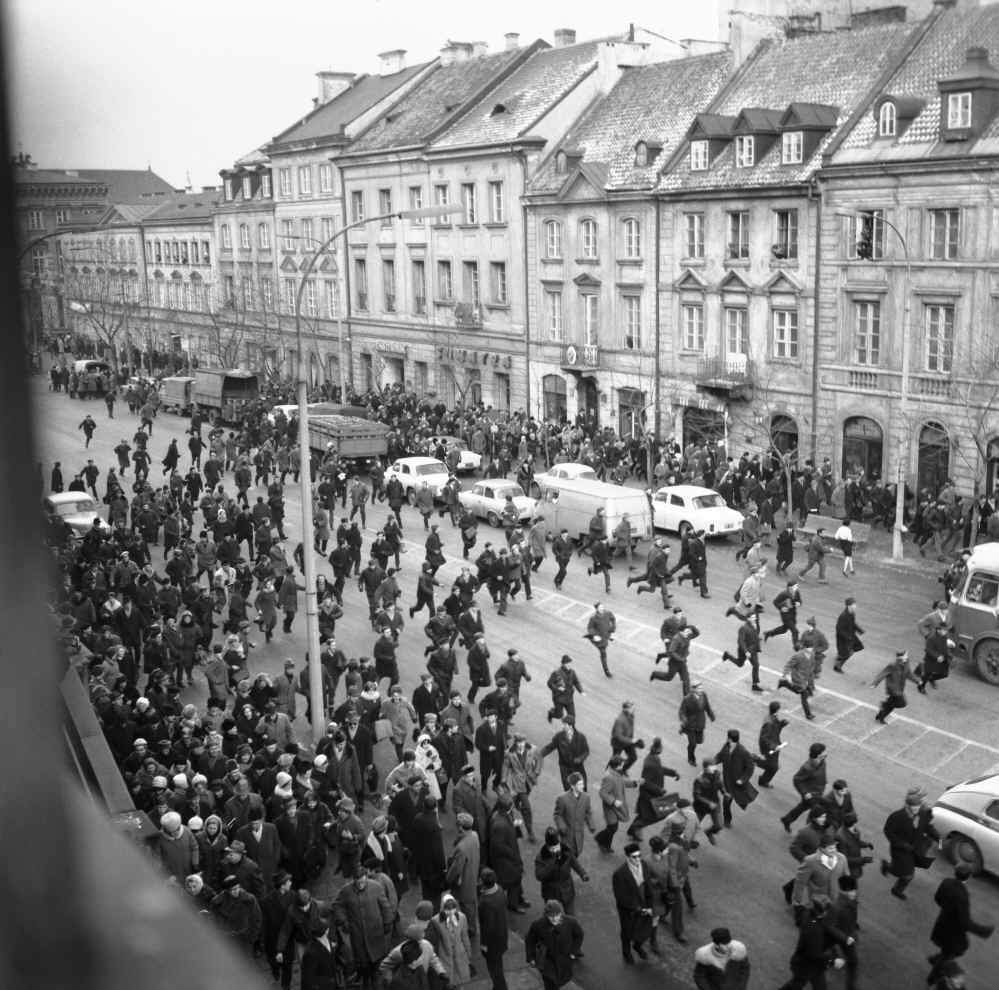 Photo by PAP/Tadeusz Zagodzinski:
Students trying to flee from armed militia in one of the main streets of Warsaw, the Krakowskie Przedmiezcie

Warsaw was my first assignment abroad in the Dutch foreign service. I stayed there for two years, 1970 and 1971, and in those years a very turbulent period reigned in Poland. I was a young diplomat in charge of the Israel section of the Netherlands embassy.
In order to understand the relations between Poland and Israel, a brief outline of the history of the Jews in Poland might be useful.
In 1939 there were 3.5 million Jews in Poland. Jewish religious, cultural and political life prospered; many Jews were assimilated in the Polish culture, but this also met with hostility. Complete integration was difficult. The Catholic Church - to put it mildly - was also not very friendly towards the Jews. Poland was liberated from German occupation by the Soviet Union in January 1945. Joseph Stalin had a Communist regime installed in Poland. Following in the Soviet armies' wake, Polish communists from before the war also returned to Poland. In the beginning of 1946, the number of Jews in Poland totaled 240 000 only. This small number, moreover, comprised mainly the Jews repatriating from the Soviet Union. But in July 1946 a pogrom occurred in the Polish town of Kielce, resulting in 42 Jews being massacred. Allegations of so-called ritual murder by Jews served as a pretext. 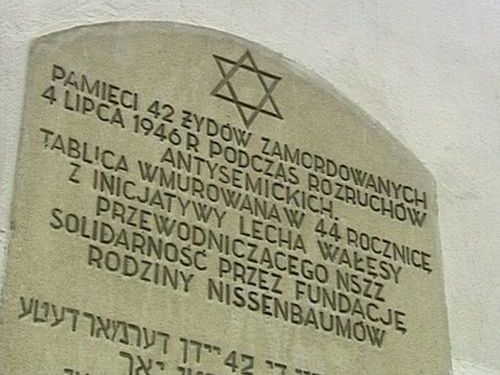 Translation: In Memory of the 42 Jews murdered on July 4, 1946. Initiative of this memorial taken by Lech Walesa chairman of Solidarity in 1990 and sponsored by the Nissenbaum Family Foundation., 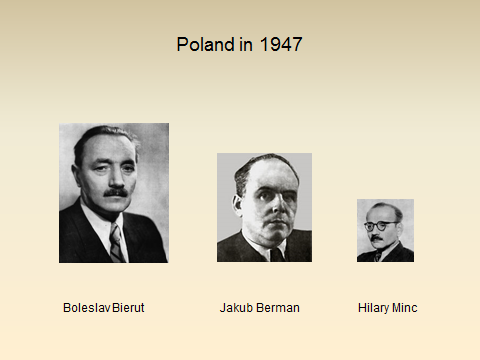 In February 1947 the Stalinist Boleslav Bierut was elected (or rather appointed) President of Poland and a year later he became Secretary General of the Polish Communist Party.
Bierut was not Jewish, but in his Politburo were also the Polish Jews Jakub Berman, head of the Polish security service Urzad Bezpieczenstwa (UB) and Hilary Minc, the so-called Economic czar.
All three were good friends with or at least had the blessing of Joseph Stalin.
In 1956 Bierut had to stand aside in favor of Wladislaw Gomulka, who initially introduced a slightly more liberal regime.

Four days after the founding of the State of Israel on May 14, 1948, Poland was one of the first countries to recognize the new state. (The Netherlands, by the way, was the last Western European country to recognize Israel -> not until January 1950.). 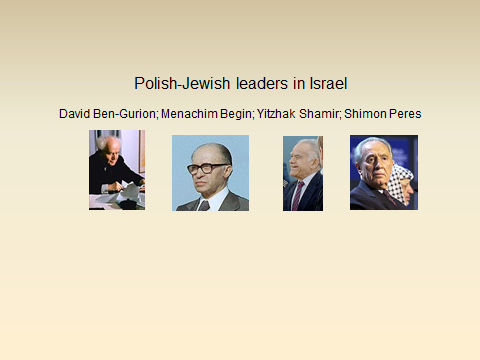 According to an estimate by the Israeli Embassy in Warsaw in 1962, in that year there were no more than 30 to 40,000 Jews in Poland (in the USSR there were about 3 million.) Nevertheless, at that time the Israeli embassy considered relations between Israel and Poland better than with any other Iron Curtain country. The few Jews who stayed in Poland did not seem eager to leave the country. They had their roots deep in Polish society, and they still harbored the illusion that they would be left alone.
However, they did not realize that there were still worse times on the horizon.

When from the beginning of the Middle East crisis, the SU increasingly focused its support on the Arab countries, there was still sympathy in Poland for Israel.
But on June 6, 1967 the Six-Day war broke out. Within days Israel had defeated its Arab neighbors.
In Poland, public opinion was content, there was even some pride, because there were many former Polish soldiers in the Israeli army: "our Polish Jews have substantially beaten up the Russian Arabs".
Among many Poles hatred of the Russians proved stronger than that of the Jews.
But the official Polish position changed when on June 10 the SU gave the signal to its Eastern European satellites for the breaking of diplomatic relations with Israel.
After a few days, the regime in Warsaw had to follow the example of the SU.
The government in Jerusalem had asked The Hague if the Dutch embassies in the Soviet Union and Poland would be allowed to represent the interests of Israel. The Dutch government approved of this request, so from July 1, 1967 the Netherlands would represent the interests of Israel in Poland and in the SU.

Precisely in the USSR and Poland the work to be performed on behalf of Israel was comprehensive, especially on consular and administrative matters:

Taking over and monitoring Israeli property and bank accounts

Granting of advances to repay emigrants' debts to Polish institutions

Care of transit visas and travel tickets on behalf of emigrants

Listening to and dealing with occasional requests from prospective emigrants. I will refer to that later on.

During a conference of trade unions in Warsaw in June, 1967, party leader Gomulka seized the opportunity to warn those who had welcomed the Israeli victory and who - according to him - had especially been the Polish Jews. "I will not tolerate a Fifth Column in our country," Gomulka said and with that remark he gave the green light for anti-Jewish cleansing operations.

Then came the revolutionary year 1968. In the USA and Western Europe, left-wing protests against the US military involvement in Vietnam had already been underway for several years. In France and the Federal Republic of Germany students took to the streets to take action against the established order.
But in Eastern Europe too, there were movements that wanted to come out from under the heavy yoke of communist regimes and that organized demonstrations for greater freedom.
The well-known example is the Prague Spring which in August 1968 was brutally quelled by Soviet tanks (incidentally, also with the help of Polish troops).
In Poland the communist regime seized the student riots in several Polish cities in March 1968 as an excuse to blame the Jews. A large number of Polish Jews lost their jobs. But in many cases this seemed also an excuse to resolve conflicts within the Polish Communist Party.
In general, however, the Polish Ministry of the Interior headed by general Mieczyslaw Moczar just wanted to get rid of Jews portraying them as taking part in a vast Zionist conspiracy to weaken socialism in Poland. 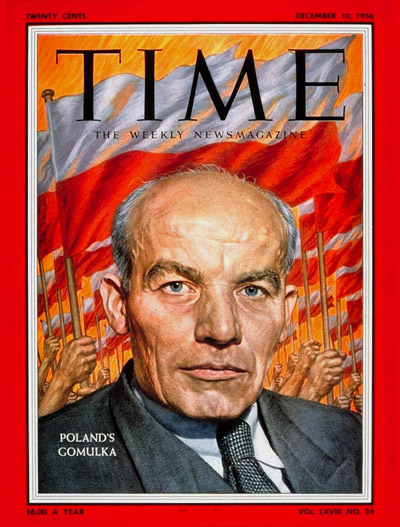 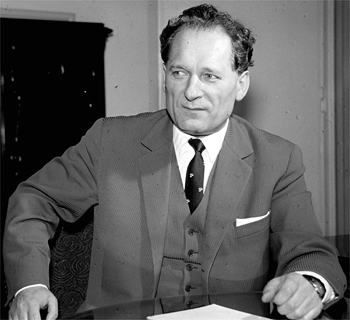 On 20 March 1968, party leader Gomulka declared that the Polish government was willing to provide exit permits to all those who regarded Israel as their homeland. The result of this situation, of course, was that also many of the last remnants of the indigenous Jewish population, who had already largely assimilated to the Polish people and party, decided on behalf of themselves or for their children's future, to leave the country. The number of applications for Israeli visas issued by the Dutch embassy increased tremendously, so that one can speak of emigration waves. 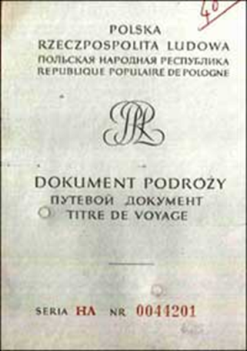 This travel document for Stateless persons, Dokument Podrozy, was issued by the Polish Ministry of the Interior to Polish Jews once they had applied for emigration to Israel and consequently lost their Polish nationality

A very unpleasant circumstance was that on the departure of Jewish emigrants the Polish authorities occasionally confiscated personal documents, membership cards, awards etc. The Ministry of Foreign Affairs in The Hague did not allow the documents to be sent by diplomatic mail. As a result the Dutch embassy staff itself acted as a courier. Whenever they traveled to the Netherlands by car, they carried those documents along in their own suitcases, protected by diplomatic immunity.

There were a few really difficult emigration cases for which the intervention of the Dutch embassy was needed.
Many times the Embassy had to intervene on their behalf to the Polish government and occasionally with success, so that they could leave the country on visas for Israel. 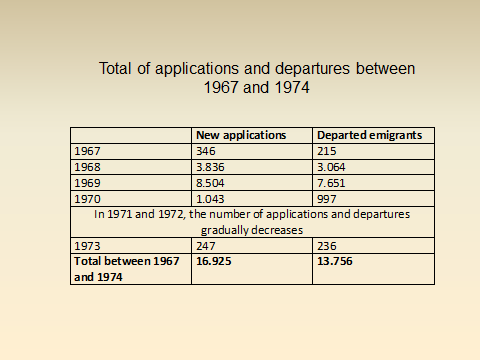 This table provides an overview of Jewish emigration from Poland June 1967 until 1974. I could not find later figures, but we assume that since 1974 the emigration took place only in dribs and drabs, while the large-scale emigration to Israel of Jews from the Soviet Union had yet to get underway. According to estimates from the Dutch Embassy in Warsaw in 1974 there were only 5,000 - 10,000 Jews left in Poland. Perhaps the survivors were too old to emigrate and due to the downfall of Gomulka at the end of 1970 (and the sacking of General Moczar), life for the Jews had become a little less miserable. At one point in time the Dutch embassy in Warsaw reported to The Hague and Jerusalem that an increasing number of Polish Jews eventually declined to emigrate to Israel, but to another country, such as Denmark and Sweden. Jerusalem considered it a regrettable phenomenon, but it also wanted to help these Jews on account of purely humanitarian considerations.

The first signs of an improvement in Polish-Israeli relations actually became apparent in 1976, when trade between the two countries, which had been put to a stop in 1968, was resumed.
In 1986, Poland became the first Eastern Bloc country to reestablish some diplomatic relations with Israel - at first at a low level.
On 9 November 1989 the Berlin Wall came down and this also resulted in the end of the communist regime in Poland. Full diplomatic relations were restored in 1990. And thus ended the representation of Israeli interests by the Netherlands Embassy in Warsaw. Gradually the relations between Poland and Israel improved more and more. A Polish-Israeli Friendship Association was established and there was a steady increase of cultural exchanges and trade.

An unprecedented growth appeared in the tourism sphere, brought about by direct flight connections, in which many Israelis went to visit Poland. 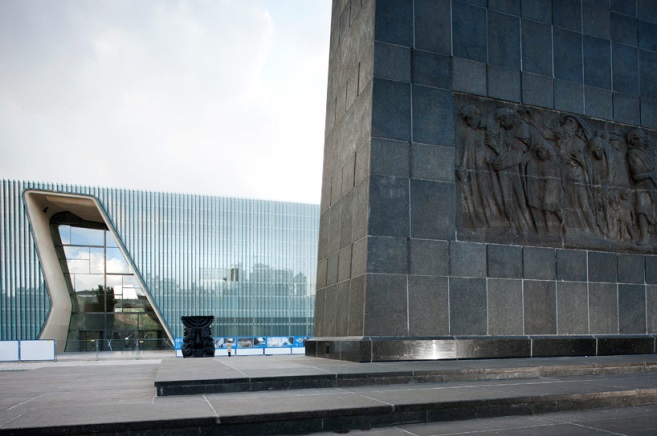 www.designboom.com: The recently opened Museum of the History of Polish Jews in Warsaw

Please mail your comments and/or questions to: © 2015 Alexander Heldring